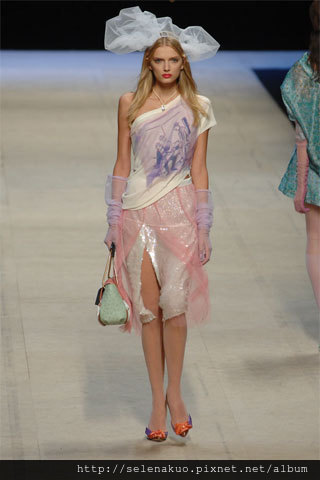 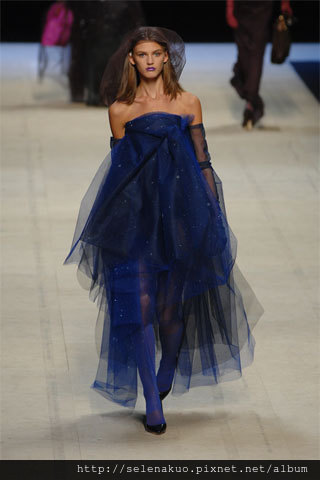 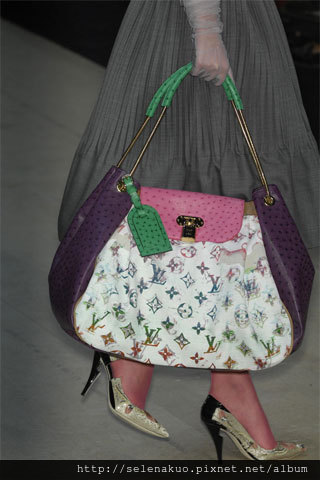 PARIS, October 7, 2007 – "It all came from our collaboration with Richard Prince, who is an artist who appropriates references within his work, which is what we do—which is fine, so long as there are three differences in everything!" declared Marc Jacobs, in the push and shove of the media mayhem backstage at Louis Vuitton. "And I'm a fan of SpongeBob SquarePants—and for all I know, so is Rei Kawakubo, because that's where our color came from!" Phew. If you take the decoder to that rush of explanation, it might take all night, but essentially what you have is Jacobs' defense against critics who skewered his New York show last month as derivative, especially of Comme des Garçons. Pulling in Richard Prince for this season's Louis Vuitton project was a typical Jacobs coup of multidimensional, referential, and self-referential significance. The artist's spray painting and texts were worked into LV bags, recalling the hit collaboration with Takashi Murakami. Prince's body of work also triggered a rerun of the 12 Carita-uniformed girls who opened that Murakami show, but this time, they were sexy nurses in see-through plastic coats—Stephanie Seymour, Eva Herzigova, Nadja Auermann, and Naomi Campbell among them. That hilariously kinky parade was inspired by Prince's Nurse paintings—one of which appeared on a Sonic Youth album cover, which again links back to Jacobs' family circle of personal reference. The collection? It was a reconfirmation, in less extreme form, of the controversial show with which Jacobs kicked off the season in New York, full of nutty combinations of fabric and garish SpongeBob pastels. The Lurex knits, pencil skirts, and gazar trenches came in mauve, yellow, pink, and purple, with deconstructed fragments of pinstripe vests, tweed suiting, and goddess-y chiffon fused into the mix. It was crazed, random, playful—yet grounded, as always, in bottom-line business sense. To see that, you only had to focus on the shoes—pointy pumps with bows and sparkles in the toe—and a new chunky line of costume jewelry. It's Jacobs' way of walking the line between creative freedom and commercial innovation. 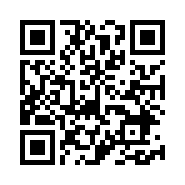